Hubner's garbage on the PA (Part 4)

Granted that Hills' article is out of date (1984), and Riddle should perhaps have appealed to more recent work, the question raised is whether Hills' defense of the PA is reliable and sound or not, in the first place.   Hubner spends a page and a half blasting Hills, so it is important to examine his claims point by point:

1.  "The references to Augustine, Ambrose, etc. are virtually irrelevant, as it does nothing to over-turn all of the evidence summarized above. It does little to the external evidence of manuscripts since the vast majority of early Greek manuscripts listed above were written prior to the Christians that Hills cites. Furthermore, this says nothing about the dozens of other Christians who quoted and preached from John and show no evidence that the pericope is even there."

Are Augustine, Ambrose etc. "virtually irrelevant"?   According to Hubner, this is because 'the vast majority of early Greek MSS" cited by Metzger were written prior to these writers.  Lets test the theory:  We have at least five EWCs who lived before 400 A.D., all commenting on the state of the text before this time (Didymus, Pacian, Jerome, Ambrose, Augustine):

So we have a solid witness, in fact a consensus on the existance and placement of the PA in John for the 50 years between 350 and 400.

But this is just the tip of the iceberg regarding patristic evidence.  There is far more evidence available than either Dean Burgon or E.F. Hills ever suspected:

First, Hubner's language is deliberately deceptive: "vast majority of early  MSS..." ?!?  What is he talking about?  Lets talk clearly about either the majority, or the early MSS in the list, but not both, please.   The 'vast majority of MSS' in the list are LATE, not early.   The 'early MSS' are not a vast majority, but a tiny minority.

To give Hubner a break, we've included P75 in the list (Metzger may have left it out on purpose, given the suspicious nature of this copy and its relation to B).
Only two papyri are earlier than the list of Early Christian Writers.
Even א and B are merely contemporary survivors from the period between 350 - 400 A.D.   This was a period when there were literally thousands of copies of the NT made all over the Empire, and two surviving copies are simply not an adequate sample for determining the state of the text in this period.  We have to turn to the contemporary writers in this period to get any real information about it.
The rest of the copies, by Hubner's own reasoning, are 'virtually irrelevant' to the text in the 4th century, and in any case are completely outnumbered by other late copies that include the PA in its normal place.


Regarding the fact that no clear evidence survives of other writers quoting the PA, simple logic dictates the reasons why:

(1) We don't know what other writers said or wrote about the PA.  Only a handful of samples of even the most popular writers survive.   We simply can't expect to find Patristic evidence for every line or passage of the NT.  Its unreasonable.
(2)  Writers often had no occasion to quote the PA.  In making the great Church Commentaries, they could only comment on parts of Scripture publicly read in the service.  Whole books are neglected, such as Revelation.
(3)   Some writers avoided quoting the PA.  In heated debates, its natural that writers would skip over scriptures that don't help their case.  Thus Tertullian for instance, seems to sidestep the PA in his dispute with a Roman bishop.

All these factors lead us naturally to expect a lack of evidence regarding the PA from at least some quarters.  Its unreasonable to claim any special weight for the apparent 'silence' of some writers.  Such special pleading is worthless.
When we actually turn to the four earliest manuscripts omitting the PA, we find that contrary to the impression given by modern critics, these manuscripts seem to be well aware of the existence of the passage: 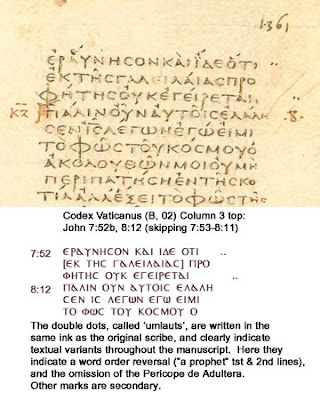