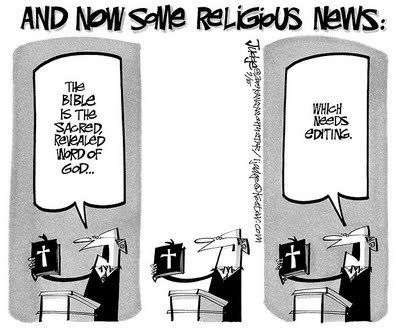 For a while we were treated to somewhat of a vacation from the usual amateurish and frivolous Metzger quotes whenever the subject of the Pericope de Adultera (Jn 7:53-8:11) arose.    Most seemed to have taken the hint that textual criticism, and criticism of the PA in particular, was a dangerous reef sporting many a shipwreck.

But the recent attempt to resurrect Metzger's luring siren song by Hubner has forced us once again to deal another blow to this crumbling dinosaur.

We have already given ample examination to the details of Metzger's claims elsewhere, and James Snapp Jr.'s recent review of textual evidence in all categories may be reasonably called exhaustive.

What is left to say about Metzger's work?  Only this:

(1)  The whole approach Metzger uses ought to have been abandoned by serious textual critics by the 1850s.   That was when people had no scientific method, and didn't know any better.    In fact, as Samuel Davidson (1848) demonstrates, the method of the day was apologetic in tone, not neutral by any stretch of the imagination.  The model in use was the 'judge, seated to hear evidence'.

Manuscripts were trotted out as if they were witnesses, each with some important statement to make about this or that passage.  They were lined up carefully in a black-and-white fashion, and allowed to vote 'yay' or 'nay' regarding some proposition about the authenticity or authorship of a passage or its wording.

Today such song and dance performances should be laughable.  This is just not how science is done, or has been done, since 1906 and the publication of Special Relativity.  There are no faces to be saved that aren't long dead.  No reputations to protect (the whole concept has been reduced to peer-fawning).   There are no concerned agendas regarding Calvinism, Nomism, or Catholicism to desperately defend.  The only dogma of interest to religion is Providential Preservation, and this has been wholly abandoned by secular academia.  The only dogma of interest to secular academia is historical-criticism, and this is scoffed at by those of faith.

In short, the time is ripe for honest and scientific review of textual and historical evidence, not parades of the supermodel fashion-show type.

Here are the real facts:

Manuscripts don't testify regarding authenticity.  They don't vote, they don't have expert opinions, and in fact, they are inanimate objects.

What they can do, is tell us the earliest outside time-spot that a given reading must have been in circulation, or what amounts to the same thing, its latest cutoff point.  They can sometimes tell us who made use of a certain passage.  They can suggest a reading's status in a given era or place.  They can provide hints about possible controversies arising from variants. They can instruct us about church practices surrounding a passage.

After that, we are on our own.

The question of authenticity must be solved on other more important grounds, such as apparent knowledge revealed in the containing document about the existance of the passage.

The question of authorship must be solved based on a combination of historical information and literary analysis of content, grammatical and historical knowledge found in both author and passage.

Manuscripts don't speak of authenticity or authorship; they speak of controversy and tampering, debate and policy, local historical understanding and practice.

In fact, manuscripts can't tell us directly about original documents at all.  They can only tell us about their subsequent treatment in a history of copying and usage.  All manuscripts and post-publication evidence is just that:  Evidence about what happened AFTER the publication of a document, and its release into the public domain.

That is why Metzger's little parade of witnesses "for" and "against" "non-Johannine origin" is such a farce.

His terse note that Papyri P66/P75,  Codices Aleph and B leave it out, without mentioning their condition or age.

His note that A and C must have omitted it, without any explanation for the mutilation of these manuscripts.

His guesses about what unknown copyists must have meant when putting an asterisk in the margin beside it in a few late copies.

His cleverly worded remark that "no Greek father" before the 12th century comments on the PA, skipping quickly over a dozen Greek-speaking Latin fathers who do comment on it.  (and the sad failure to correct this by his final editor Ehrman, the very scholar who wrote a book on Didymus the Blind - a 4th century Greek father who does comment on it..).

His deliberate omission of the late dates of all the manuscripts that displace the passage (they are all post 9th century documents).

His sluffing off of the real controversy around the fact that the three beginning verses are included in the omission (Jn 7:53-8:2, connecting narrative and context).

His bald assumption concerning the "earlier and better" manuscripts.

His failure to mention that the other editor on the UBS committee was an apparently nonconformist Roman Catholic Cardinal.

These are things that make Metzger's summary of the "evidence" laughable as a scientific document.