The Full Story on "Codex X" 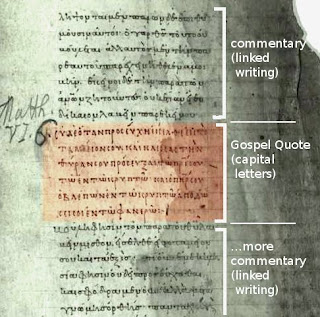 The following discussion is extended from:

Just a test.
Posted by Nazaroo at 5:07 AM No comments:

The announcement and link to this free online dissertation on the PA was originally posted on Evangelical Textual Criticism blog by Wasserman.

Its a 500 page article on the PA that goes into depth in considering the main options as to the origin and history of John 7:53-8:11 (the Pericope [de] Adultera[e] PA).

I am posting this short review of a part of it, to give people some idea of what is in it:

This section is anything but "(pseudo)scholarly": It is a really first-rate and deep discussion of many of the vocabulary questions. Something of a 'coup de grace'.

3.2 orthros(ou). An excellent and thorough 3 page discussion on this word, providing a wealth of material for future commentators. Full marks.

3.3 paraginomai. Great, informative talk, which will be of assistance to those at intermediate-level Greek, seeking more nuance.

3.4 laos/oxlos. An excellent and deep introduction to the usage of these words in the Gospels, NT, & LXX. Hats off. Very compelling.

3.5 kathizo. Subtle nuances of usage, again useful for those wishing to master Koine, and are wondering as to the weight of stylistic variation vs. meaning.

This is your best section to this point: a three-page masterpiece, filling out a very complex background on many levels of culture, context, religion and literary purpose. What a model.

I have left off commenting on 3.1, in part because I think some things were missed in this section. A future discussion can await that.

Generally, Sections 1-3 of this chapter are a tour-de-force, a scholarly and balanced response with excellent references and a good grasp of the issues, and more than adequate answer to the stylistic objections of the 19th century, beginning with Samuel Davidson.

Congrats on a great piece, which ought to be well-quoted and useful for students of both NT Greek and TC.

Gospel of Barnabas and the PA

We've posted a tentative introduction to the Gospel of Barnabas onsite.

Nazaroo has contributed a brief analysis of the editing to the PA done in the process of including it in the final version of Gospel of Barnabas (GB).

What intrigues me is just how much of GB is from the late author/editor (disgruntled monk/Islam apologist), and how much of the GB is borrowed from a previous harmony something like the Diatessaron.

If this original harmony (perhaps even a lost or banned version of GB, c. 500 A.D.) had in it the PA, this would be remarkable evidence for the existance of the standard text, even though it has been heavily edited in the final version of GB.

Does anyone have an opinion of the extent of the Islamic apologist's contribution to this book? (GB).

The Story of John 8: 1-11 shows forgivesness but does not show the restoration or the other parties engaged in the sins which this woman was participating in. We know she was guilty of something because Jesus said, "Sin no More" Who was he sinning with and would Jesus have gone to confront these sinners after or perhaps confronted the Pharisees once more time after the girl was gone
Does scripture indicate what sort of restoration took place in the community? (besides the general confirmation scripture gives for restoration to all those who repent) Surley Jesus had other witnesses to the events afterwards. What happened in the days following ? Surely we as Christians can have that wisdom and understanding from the Lord, as to what happened

Posted by Miriam at 7:09 AM No comments:

The Pericope de Adultera Website now has a blog!

We have decided to try the Google Blog resources, to allow those interested in Johannine studies to have an input in the direction of future research on our site. Please post your comments and suggestions in the comments.

We will probably moderate comments in the same way we have been running the TC-Alternate-List Yahoo Groups (textual criticism) group.

We are looking forward to input on the site from those who wish more to be accomplished in this field.