One of the most interesting and powerful proofs that the PA (Jn 7:53-8:11) originally belonged to John's Gospel is the startling and crisp chiastic pattern found in the surrounding context with the PA embedded in it:

This pattern is left broken and impoverished by the removal of the verses.  What does this mean?  It means that the surrounding Gospel was composed with this section in place.

Those who argue that John originally lacked the passage simply don't really understand the problem:  The very manuscripts which omit the passage, also preserve the text of John in the surrounding areas, along with the evidence for the deliberate and conscious chiastic structure here.

If the Gospel itself had been tampered with to create this chiastic pattern, then there would be no evidence of the pattern in the "original" text without the verses.   Put another way, it is clear that the passage was removed from John after it had already been inserted, and after John had already been modified to accommodate it.   But if that is so, then the manuscripts missing the passage cannot be the original text, and they instead witness to its removal much later than its insertion.

The real original John would not have looked anything like the text presented in the four early manuscripts that leave out this passage, for they are all pretty much identical to the version of John that was created to contain it.

But the only manuscripts attesting to this passage's absence are these secondary manuscripts which at the same time betray a version of John that contained it.  That is, P66, P75, B and  א  can't be the original version of John, but they are the only reason the passage came to be in doubt in the first place.

Those interested in more information on Chiastic Structures in John, can look at our webpage here:

Just recently Craig Bennett posted this in the comments at Credo House:

There I make the point that the reference Jesus is making about marriage and divorce isn’t a teaching about it; rather is slapping the religious leaders in the face and telling them that they have divorced God and married money.. and therefore have committed adultery against God."

(emphasis mine).  This is an interesting connection that Craig has made to the surrounding context, which may in fact be an additional layer of meaning to Jesus' parable.    If so, and if the reference was meant to be taken this way by the Pharisees themselves, then this realization may be a factor in the behavior of the Pharisee party later when confronted with the accusation of 'adultery' during the Woman Taken in Adultery incident.

John's Gospel has in fact several structural layers, all deliberately designed into its narrative.  One of the most remarkable is the thematic structure of the Gospel, with the contrast between the Law (Moses) and Grace and Truth (Jesus).   The theme of "Glory" also runs deep throughout this gospel, and forms a kind of bracketing structure around important sections and motifs. 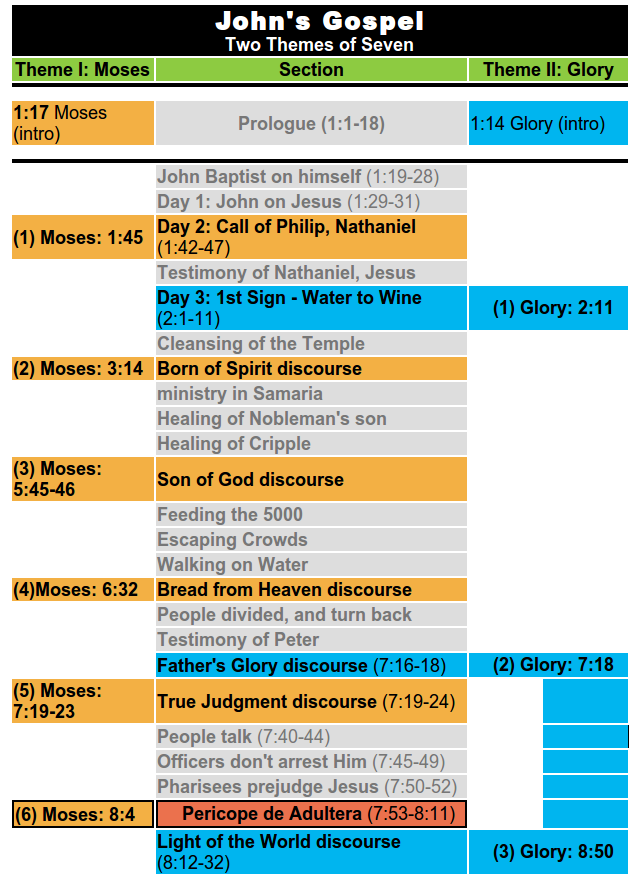 Although the thematic structure is more complex than the O.T. Quotation Structure (discussed in the previous post), it is still quite strong in its connection to the Pericope de Adultera as a purposeful part of both main themes.

These themes are clearly Johannine, as they are introduced in the Introduction (Chapter 1), and continue throughout Jesus' speeches in the final Passion narrative.

A Quick Look at New Internal Evidence for PA

All four Gospel writers created elaborate structural patterns in their choice of quotations. These structures have deep meaning, for they collect and organise the incidents and speeches of the Gospel into great themes and logical sequences of development. If we miss these contexts and thematic associations, we also miss important clues as to the literary and didactic purpose of each Evangelist.

And yet for all its sophistication, the O.T. Quotation Structure embedded in each Gospel is a model of clarity and simplicity. We only need list the quotations in order, note who they are quoted by, and what they are quoted about, to see beautiful thematic patterns unfold. These patterns were not meant to be hidden, but rather discovered by those who truly seek truth and labour to discover it.
While this structural patterns serve a very important purpose in preventing or at least exposing severe tampering of the Gospels by the ignorant, we are convinced this was not their only purpose, or their main one. Instead, these structures were meant to be found and appreciated by Bible students everywhere.


John's Gospel begins like all four canonical Gospels, with a standard introductory formula, Isaiah 40:3 (John 1:23). This is common to all the Synoptics, Matthew, Mark, and Luke as well. He compliments this with a quote from Psalm 69:9 (John 2:17) in the narrative/commentary.
After this, the Evangelist follows with a series of two chiastic patterns of quotations. These are like mirrors unfolding backward and forward from around a central core-point. It is a beautiful and quite common feature of John's Gospel in fact, which is virtually laced with smaller chiastic patterns throughout.
Each of these chiastic patterns centers around a critically important part of the Gospel, both in content and in evangelical/didactic theme. The first pattern centers around the Pericope de Adultera (John 8:1-11), obviously an important point in establishing its Sitz en Leben in the Gospel. The second pattern encircles the Great Commandment, which is presented in two developing forms, very close together.
Other complimentary and supplimental clues are provided by the Evangelist, such as the introduction of 'Dawn' and 'Night', symbolizing Light and Darkness, one of the many powerful themes coursing through John.

Without further ado, we present the majestic O.T. Quotation Structure for the Reader to view:

We encourage fellow Christians to download and print this chart, and use it for Bible study and research.

In documenting and criticizing the infamous Revised Version (1882) and Westcott & Hort's underlying Greek text of the NT, William Wallace Everts also remarked on the unfortunate and mistaken dispersion against John 7:53-8:11, as follows:


'The passage in the Gospel of John concerning the woman taken in adultery was one of the regular church lessons. Jerome found it in many Latin and Greek codices, and preserved it in his Vulgate [Latin translation]. It is found in 1,650 codices.  Prof. Burkitt says, "It seems difficult to account for such a blunder as its omission, except by some such accident as the loss of a leaf or two from an exemplar." Dr. Scrivener finds strong internal evidence for these verses. The scribes have been vindicated from the charge of interpolating. It is seen to be incredible [also] that the Doxology in the Lord's Prayer, the cry of agony in the garden, and the "Father, forgive them!" on the cross, could have been invented by anyone, least of all by a mechanical copyist.'

We have compiled the following articles on the above referred to persons:

Jerome on the PA ..click here. etc.
Scrivener on the PA
Harris on a lost leaf of PA
Bauscher on Syriac Haplographic loss of PA

Books dealing with the PA question

"If the critics are not interested in the validity of their methodology, but nonetheless make use of manuscript evidence, I would like to recommend some studies of their professional resources. A small, interesting, and powerful brochure, The Ancient Text of the New Testament, by Jakob Van Bruggen (Premier Printing, Ltd; 1976, 1979, 40 pages) devastates the liberal criticism. The footnotes provide a good bibliography.

An earlier work, The King James Version Defended, by Edward Hills (1984), while valuable, suffers from some deficiencies, one of which is an excursion into the philosophy of science which—even if it were without other errors—would be irrelevant anyway.

Zane Hodges wrote at least three papers between 1961 and 1975. More recently, with Arthur L. Farstad (and some consulting editors), Hodges edited a critical edition of The Greek New Testament according to the Majority Text (Thomas Nelson Publishers) - a major work that required incredible patience. It contains a bibliography of about 150 entries.

Perhaps the best production for immediate reading is Wilbur N. Pickering’s The Identity of the New Testament Text (Thomas Nelson, 1977). Further references to this excellent book will be made as we proceed. In particular, he contrasts the painstaking procedure of the usually despised Burgon with the sloppy methodology of his detractors. Even the least academic member of the ghetto congregation in East Podunk, Missovania, ought to read some of Pickering’s book.
[Its available on the internet free, here:

But it may be that the people of Podunk are not only turned off from reading Pickering, they may also doubt that logical analysis can be at all interesting. Interesting or not, it is far more important than Homer, Alexander, and Virgil. For that reason, I shall partly repeat and more fully extend some of these introductory inducements."

Posted by Nazaroo at 9:32 AM No comments: